Workbus is the fourth episode of the ninth season of the American television comedy series "The Office" and is the show's 180th overall. It was written by Brent Forrester and directed by Bryan Cranston. It will aired on NBC October 18, 2012. It was viewed by 4.28 million people.

Andy is presenting the office staff with a video compliation of the team's softball season. While the staff are initially excited they soon realize it is Andy's horrible attempt to engage in the internet craze of making a "fail video". The video consists of the staff doing whatever was considered normal and Andy making vulgar noises over it. In retaliation Jim pulls up a video of during one game Andy tired to carry the full water cooler and ended up falling over and spilling the water all over himself. The office staff begin to chant "Fail! Fail!" at Andy to which he eventually gets angry and leaves.

Jim meanwhile is being extremely nice to Pam due to her understanding with Jim wanting to go to Philidelphia to work with his friend on their new buisness. He is looking for a way to pay her back.

Nellie is looking eagerly to fulfill her life-long dream of adopting a child. She asks Andy if he is willing to help her out however Andy rejects her still hating her for what she did to him.

The office staff are still angry at Dwight for caring more about money than about their own safety. Dwight argues that in order to insulate the wires they would have to open the walls and close the office building down for a week. Pam makes a comment about how she would love a week off work and Jim immediantly sets off to work to acheive this. He puts a popcorn bag in the microwave and only pops one kernal before placing it under Dwight's desk. He achieves in making Dwight believe the electromagnetic radiation caused it to occur and finally scares Dwight when Jim tells him it may cause infertility.

Jim believes he got them a week off work however Dwight reveals he has gotten them a new workspace for the week-a bus. The office staff find it cramped and uncomfortable. Erin meanwhile learns of Nellie wanting to adopt a child and having been adopted herself, offers to help Nellie write her letter.

Jim, having failed at getting Pam a week off work, decides to cheer her up by convincing Dwight to drive the bus to LaVerne's pie stand, Pam's favorite pie shop. Dwight refuses at first however after convincing Andy and the rest of the office staff Dwight is forced to do so. The bus drives off leaving Clark and Darryl behind however they don't seem to mind the least.

While the bus drives along it picks up a hitchhiker-Creed who smiles and loudly announces he is playing hooky from work-before realizing that the entire office staff is on the bus.

Nellie submits her letter to Andy however Andy loudly and rudely tells Nellie how poorly written the letter is and how her dream will never come true. Nellie quietly goes to the front of the bus and behind a curtain. Erin has clearly heard this as well.

Dwight decides to stop the bus as he is tired of being pushed around by Jim. The fact Philip was not his child had been knawing away at him and he finally had given up. He climbs out the emergency exit door in the roof and goes off to sulk. Pam notices this is uncharcteristically Dwight and tells Jim to go find out what he is sad about.

After some awkeward conversation about how Dwight is sad that he is still left childless after all this time he eventually comes to the realization that the office staff is kind of like his children. Jim convinces him finally to go to the pie stand and Dwight does so.

Andy hears Nellie sobbing behind the curtain and jokes with Pete about british women being over-emotional however Pete remarks "I don't think that's Nellie". It is reveiled that Erin is crying from what Andy said about the letter and Nellie is comforting her.

Jim and Pam make up while eating pie and Kevin tries to get Oscar to hit him in the face with his pie to which Oscar eventually gives up and does. Andy feels terrible about what he said and adds a few sentences about how Nellie is actually somewhat caring and agrees to sign it.

Once back at the office building, Andy insists they keep playing the games they played while on the road and annoys the office staff with his constant singing and banjo playing. 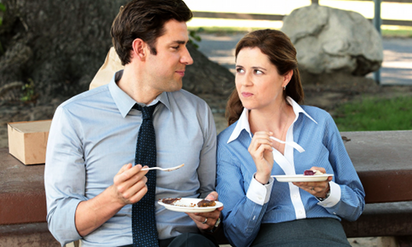 Jim and Pam in the episode "Work Bus" 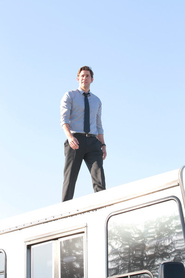 Jim standing on the bus 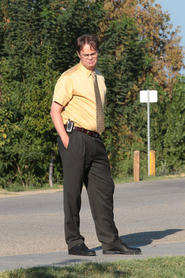 Dwight in the episode "Work Bus" 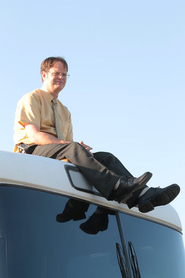 Dwight sitting on the bus 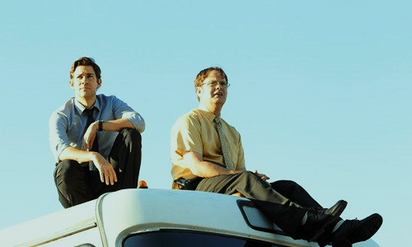 Jim and Dwight in the episode "Work Bus" 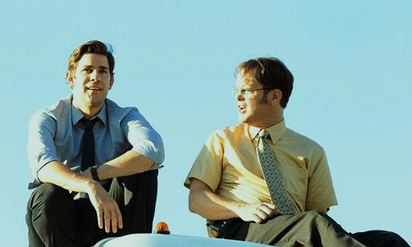 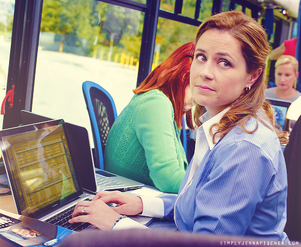 Add a photo to this gallery
Retrieved from "https://theoffice.fandom.com/wiki/Work_Bus?oldid=32983"
Community content is available under CC-BY-SA unless otherwise noted.