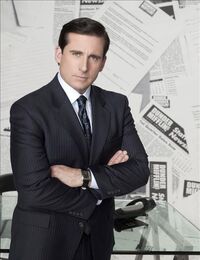 NBC is pulling out all the stops for Steve Carell's final season as Michael Scott in The Office. The highly anticipated episode will be "supersized," running for 50 minutes! Not only that, but NBC is also serving up an extended episode of Parks and Recreation!

The April 28th episode of The Office will air from 9-9:50 p.m. and Parks and Rec will air from 9:50-10:30 p.m. You can also look forward to big name guest stars, Ray Romano and Will Arnett, as well as Carell's replacement, Will Ferrell!

Are you excited to see Will take the ropes from Carell or are you depressed that Michael Scott is leaving the office for good?

Retrieved from "https://theoffice.fandom.com/wiki/User_blog:Babyjabba/Steve_Carell%27s_final_episode_to_be_Supersized?oldid=24393"
Community content is available under CC-BY-SA unless otherwise noted.