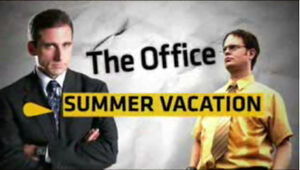 On August 29, 2007, NBC.com posted The Office Summer Vacation as a way to promote the upcoming Season 4. It reveals what many of the characters of The Office did on their summer vacation.

These scenes were later included on the Season 4 DVD and on YouTube here.

Retrieved from "https://theoffice.fandom.com/wiki/The_Office_Summer_Vacation?oldid=101192"
Community content is available under CC-BY-SA unless otherwise noted.