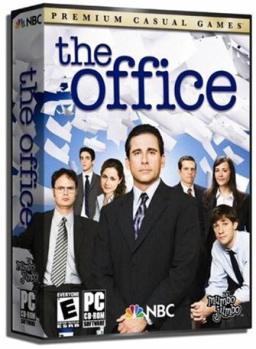 The Office is a video game based on the sitcom of the same name, developed by MumboJumbo featuring the characters from the show as bobblehead dolls.Players will be challenged to complete jobs and pull pranks around the office, the game was released for Windows-based PCs on November 28, 2007.

So you think you could survive the zany workplace of NBC's Emmy Award-winning comedy series The Office?

Put yourself to the test as you dive into the hilarious environment by maneuvering through the quirky and frenzied fun of The Office game.

Play pranks on your rivals to slow them down, earn points by helping out your co-workers, and avoid getting distracted by the office visitors, all while competing to be the best Dunder Mifflin paper salesperson you can!

"I'm not superstitious, but I am a little stitious." - Michael Scott

Retrieved from "https://theoffice.fandom.com/wiki/The_Office_(Video_Game)?oldid=73706"
Community content is available under CC-BY-SA unless otherwise noted.