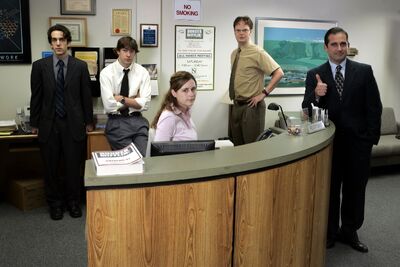 Season 1 of The Office began on March 24, 2005 on NBC. It is based on the BBC series created by Ricky Gervais and Stephen Merchant, and developed for American television by Greg Daniels.

The first season was a mid-season replacement and thus did not include a full set of episodes. The season had six episodes that began airing from March 24, 2005 to April 26, 2005. The premiere episode was written near word for word from the first episode of the British series, though names and cultural references were changed and some small extra scenes were added.

The season begins with a documentary crew that arrives at the offices of Dunder Mifflin to observe the employees and learn about modern management. The main characters are introduced as well as some minor characters. Rumors of downsizing begin to spread in the office and the possible closure of the branch. Michael Scott, Dunder Mifflin Scranton's regional manager, denies the rumors to boost morale.

In the season finale, Jim Halpert, a sales representative, begins dating Katy, a purse saleswoman who visited and set up shop briefly in the office. Jim also has an interest in the office receptionist Pam Beesly, though she is engaged to Roy Anderson, which expands later in season 2 of the show.

Retrieved from "https://theoffice.fandom.com/wiki/Season_1?oldid=72700"
Community content is available under CC-BY-SA unless otherwise noted.