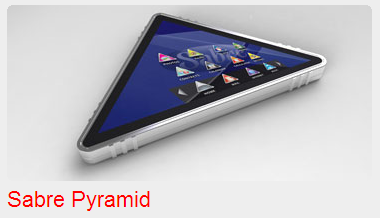 The Pyramid is an invention created by Sabre. It is a form of tablet computer, in the shape of a triangle. The tagline for the product is "Unleash the power of the pyramid". As advertised on the Sabre website, it claimed to be "Your portable connection to everything in space and time." Stanley is seen saying "You've got to unleash the power of the pyramid" while talking to a client. This is because he wants to earn points from Andy for the incentive program. In the episode "Test the Store" Dwight is holding a mini version of the Pyramid, called an Arrowhead. Erin is dressed up as a hipster and in line for the opening of the first Sabre Store, to get her hands on the new Pyramid tablet.