"Princess Unicorn" is a toy for young girls that became wildly popular at Christmas time. Dwight Schrute bought out the market for the toy and sold them for a huge profit margin in the episode "Moroccan Christmas." 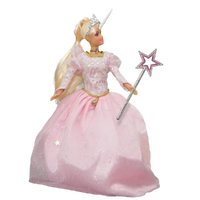 Princess Unicorn is a human princess similar to a Barbie doll, but with a horn coming out of her head. She comes with a magic wand adorned with crystals, a pink necklace, and a gold belt.

Princess Unicorn comes in a variety of races, including Caucasian and African-American.

Appearance in the Episode

Dwight Schrute buys many of the Princess Unicorn toys in order to make a huge profit. He plans to sell them for over $200 and does so successfully, although Jim Halpert sarcastically comments that Dwight's plan is the meaning of Christmas. Michael Scott is also aware of the Princess Unicorn craze, as well as Sasha Flenderson, Toby's daughter. Dwight sells his last doll to Darryl Philbin, however, Toby promised it to Sasha, so for once he can be the hero. After Toby desperately begs, Daryl decides to give the prized doll to Toby for double the price ($400). Toby is shocked to find out it is the African-American version of the doll, but takes it anyway.

"Princess Unicorn is from a distant land on a distant planet far away in the future. She came from her father, king of unicorns, and her mother, queen of the princesses. Sorcerissa, the evil witch, cast a spell on Princess Unicorn's parents, forcing them into another dimension and doused Princess Unicorn with radiation. The radiation did not hurt Princess Unicorn, but gave her magical powers. She can summon her magic by holding her wand and calling out, my horn can pierce the sky! Now she uses her magic and beauty to write for the school paper, defend the kingdom, and battle Sorcerissa, so she can be united with her mother and father someday."

(sung) My horn can pierce the sky.

Toby desperately tries to buy Princess Unicorn for his daughter, however, he gets an African-American one for Sasha from Darryl, for double the price. It is reported that he may have given it away to Toys-For-Tots on the Princess Unicorn website, listed under testimonials.

Dwight made a huge profit on the Princess Unicorn by selling it to desperate families in search of the beloved toy. In a talking head, he explained how it is the most popular toy of the year. Dwight thinks that Princess Unicorn was created when a royal horse had sex with a king with a horn. 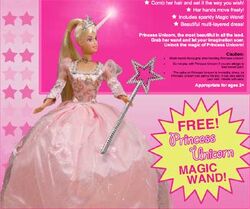 Retrieved from "https://theoffice.fandom.com/wiki/Princess_Unicorn?oldid=101954"
Community content is available under CC-BY-SA unless otherwise noted.