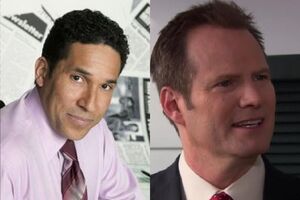 Oscar Martinez and Senator Robert Lipton had an affair while the senator was still married to Angela.

The exact moment that their relationship began, is unknown. We first find out about it when Oscar buys Angela 's cat, Comstock, and later is heard on the phone. It is implied that he is having an affair with the Senator. ("New Guys ") In the episode, "The Boat", their relationship is confirmed when they are caught kissing. Angela finds out about the relationship in "The Whale". She is furious about this and seeks revenge on Oscar. Soon following, they come to an agreement where the Senator is not seen in public with Oscar. Later, the Senator announces that he is gay and divorces Angela. His relationship with Oscar is also ended.

Retrieved from "https://theoffice.fandom.com/wiki/Oscar-Robert_Lipton_Relationship?oldid=91963"
Community content is available under CC-BY-SA unless otherwise noted.