View source
watch 02:56
Doctor Strange in The Multiverse o Madness - The Loop
Do you like this video?
Play Sound

Michael Schur
Moses "Mose" Schrute is a character played by Michael Schur on the television series The Office.

Mose is Dwight's cousin. Together they own and operate a beet farm.

In a deleted scene from the "The Injury", Michael describes Mose as a "weirdo": "Twenty-seven years old, never left the beet farm."

In a deleted scene from the episode "The Carpet", Michael advises Dwight to tell a joke as part of his sales pitch. Dwight phones a customer and tells a joke he heard from Mose: "What is black and white and red and can't think? A nun who has a beet for a head." The person on the other end apparently gets offended, and Dwight says, "I'm Catholic too."

In the episode "Initiation", Mose assists Dwight in initiating Ryan as a salesman, but Ryan decides that he has had enough once Mose appears ready for a wrestling match with him.

When Dwight yells "You must vanquish your fear!", Mose emerges with a tan thermal underwear long sleeve shirt, with the word "FEAR" emblazoned on the shirt in red duct tape. Ryan jumps out of the chair and leaves the farm. After Ryan departs, Dwight asks "Where are the animals?" Dwight then gives Ryan apology gifts from Mose: a basket of eggs, fat-back bacon, and "something [Mose] whittled" that resembles a Venus figurine. Ryan and Dwight launch the eggs at the office of their failed sales attempt.

In the episode "Money", when Jim and Pam decide to spend a night at Schrute Farms, they have a series of unusual encounters with Dwight's cousin Mose.

In "The Deposition", Dwight brings Mose to the warehouse to play ping-pong. If Michael is to be believed, this is the first time Mose has left the farm.

In "Goodbye, Toby", Mose delivers a raccoon to the office via bicycle in order to help Dwight with the 'playful hazing' of the branch's new HR representative Holly Flax.

Mose makes an appearance in the episode "Koi Pond", dressed in an Amish attire and standing still like a wax figurine.

Mose appears in Dwight's daycare center in the episode "Counseling", painting the walls in the dark whilst wearing a baby carrier.

In the episode "WUPHF.com", Dwight explains that Mose was always crowned Hay King at Hay Place/Hay World when they were younger.

Mose is the valet during Andy's garden party at Schrute Farms. He pries the keys from a reluctant Toby and then slams on the accelerator and plows Toby's car through a cornfield with a nervous-looking Toby watching. Mose lines up everyone's cars and attempts to drive over them with a moped, but he changes his mind at the last moment and runs across them. ("Garden Party")

When Dwight is in a high-speed chase with Angela as Dwight has taken a sample of her baby's DNA to determine if he is the father of her child rather than the Senator, Dwight calls Mose telling him to initiate "Operation Phoenix". Mose is evidently confused so Dwight replies "Just get the car ready!" The plan involves Mose dressed up like Dwight and waiting in a car that looks like Dwight's. Mose then drives off and Angela believes him to be Dwight and follows him. After realizing that he was a decoy, Angela slaps Mose and demands Mose tell her where Dwight went. Mose proceeds to run away in his usual manner, running with his arms swinging no higher than his waist. ("Free Family Portrait Studio")

Mose is one of the candidates that Dwight picks to interview for the job as a junior salesman at the company. As they all wait in the conference room, Mose stares at the office through the blinds. Dwight talks about his confidence in Mose and says that as Mose is terrified of paper, he will try to sell it out of the building as fast as he can. During the interview, Dwight notices that on his resume, Mose claims he has worked for a company called Dow Chemicals for 15 years. Dwight points out that as they live together, he knows that is not true. Mose proceeds to stand up, run out of the office, out the building, across the parking lot and down the street as fast as he can. ("Junior Salesman")

As Dwight waits on the porch for his cousin Zeke to get there, Mose runs around the yard. When Zeke arrives, he tells Mose that his mom says "hello" and Mose tells him to tell her "hello" back. ("The Farm")

As Angela has her bachelorette party at Schrute Farms, Mose watches from the window and eventually kidnaps her. Dwight reveals that this is a tradition in which he must buy the group a beer for Mose to return his bride. Mose reveals that he had her in his trunk and runs off as Angela curses him out. Mose can be seen at Dwight and Angela's wedding, longingly looking at a scarecrow dressed up as a woman. ("Finale") 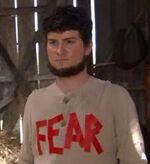