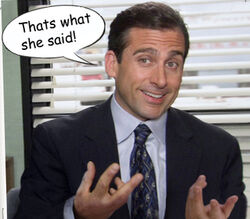 Michael considers himself to be an eloquent, witty, and entertaining public speaker. However, throughout the series he botches the delivery and use of common phrases and idioms.

Retrieved from "https://theoffice.fandom.com/wiki/Michael%27s_Botched_Phrases?oldid=99269"
Community content is available under CC-BY-SA unless otherwise noted.