Louanne works in the Annex along with Toby and Kelly. She has the desk near the kitchen door which faces toward Toby's desk. She almost never participates in office activities, has no audible lines, and is seen only in passing in the first three seasons.

Louanne does not participate in meetings or almost any other event. Her mini water fountain is a unique identifier of Louanne's desk, as it appears throughout the series on numerous occasions. While Louanne's last on camera appearance is in Season 3, her desk continues to appear to be in use, as many papers and folders litter the surface and her signature water fountain and computer monitor are turned on.

Considering her absence from every meeting and almost all events, Louanne may have been a corporate employee, like Toby. She may also have worked in human resources as well, inferring from a binder on her desk in Hot Girl that says "Nutritional Healing" and her plants and water fountain that were intended to induce a calming effect. However, Dwight mentions in The Dundies that there are no female HR employees.

She may have quit shortly after another former employee, Hannah Smoterich-Barr, as Louanne is briefly seen in the following episode Back From Vacation.

In an online web chat, producer Greg Daniels identified the woman as Louanne, but it was not clear whether he was referring to the character's name or the actor's. Angela Kinsey and Jenna Fischer confirmed the actor's name.

Daniels believed it would be more realistic to have office employees that we know nothing about, but as the series progressed, her continuing presence became harder to explain, and she disappeared just as mysteriously as she arrived.

Like Creed Bratton, Louanne plays a character with the same name as the actor.

Although there was no solid evidence to suggest it, many fans had originally linked her to possibly being Marjorie, a character mentioned in passing in the episode The Fire.

It was originally believed that Louanne Kelley's name was simply Luanne, and her last name was unknown. However, it was discovered in 2019 that there is a frame on a pillar in the annex next to Louanne's desk that states "Special Award" and the award is dedicated to a "Louanne Kelley." While this frame appears in many seasons, it is often small and too hard to read. In Livin' The Dream, however, a larger, clearer image of the award is shown, indicating that her name is indeed Louanne Kelley instead of Luanne. 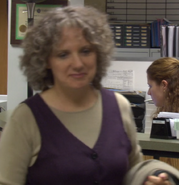 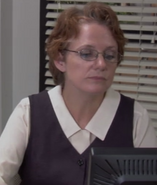 Louanne at the end of "Hot Girl"

Louanne working at her desk in the middle of "Grief Counseling" 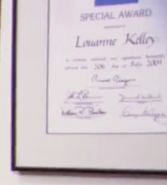 A screenshot of Louanne's award.
Add a photo to this gallery
Retrieved from "https://theoffice.fandom.com/wiki/Louanne_Kelley?oldid=94947"
Community content is available under CC-BY-SA unless otherwise noted.