Here Comes Treble is the fifth episode of the ninth season of the American televison comedy series "The Office" and is the show's 181st overall. It was written by Owen Ellickson and directed by Claire Scanlon. It aired on NBC October 25, 2012. It was viewed by 4 million people.

In order to play a Halloween prank on his coworkers, Dwight wears a jack-o'-lantern on his head and succeeds in scaring Erin. When he tries to take it off however he realizes it is stuck! Jim tries to pull it off but it doesn't work. Jim then later demonstrates using a baseball bat and a jack-o'-lantern how he can smash it off Dwight's head but Dwight runs away in fear. Dwight spends the rest of the day trapped inside it and mentions how it will probably come off in a few months.

As the characters come in they explain their costumes. Pam explains how she is Cinderella since her kids like her but she is also a doctor so as to set a positive example for them. Jim explains he is not in costume since he has an investors meeting today.

Andy is very excited meanwhile as he has gotten the current members of "Here Comes Treble" his former a capella group at Cornell to come and perform. Andy tries to act as those he is a hero to them and that he was a singing legend however much to Andy's annoyance he learns that his old friend- Broccoli Rob has claimed credit for Andy's college nickname as well as his signature songs. Erin, while somewhat disgusted at some of Andy's college stories decides to help him by convincing the a capella members to sing Andy's favorite song in front of the office so Andy can do his signature solo and impress the office staff.

Angela brings her husband, The Senator to the Halloween party and the Senator seems happy to see Oscar. He tries to display affection towards him however Oscar doesn't seem comfortable with them doing it in front of Angela.

Dwight meanwhile discovers a pill on the floor. He looks it up and realizes that the pill is used for treating anxiety disorders and believes that someone in the office is deranged. Nellie tries to convince Dwight it is nothing serious as she later reveals the pill belongs to her and its for a minor anxiety disorder. To prank him, she plays along with his theory of someone in the office being insane and decides to help him catch the owner.

Jim goes to lunch with the other investors and is pressured to invest $10,000 however he appears quite reluctant and worried in doing so despite gaining the approval of his fellow friends. He seems worried what Pam will think.

Dwight and Nellie leave the pill on a plate in the kitchen and wait with a giant butterfly net to capture anyone who claims it. Dwight notices that Darryl expresses interest in it and pretends to act insane hoping Darryl will follow suit. Darryl decides to prank Dwight and tricks him into smearing peanut butter all over his face before denying he had any logic in making him do so. Meredith then tries to take the pill and Dwight puts the net over her. Nellie then admits the pill is hers and Dwight is forced to let her go.

Andy gathers the office staff in the conference room and the a capella group begin their song. Jim and Pam meanwhile discuss Jim's plan to invest and they end up arguing throughout the whole song. Just before Andy can do his solo however, Broccoli Rob appears via webcam and begins singing it completely upstaging Andy.

Jim and Pam continue to argue about how much Jim invested. When Jim tries to change the subject to the song "Monster Mash" Pam uses it as a metaphor as to Jim's decision. Kevin believes they are actually arguing over the song however.

Andy and Broccoli Rob continue to argue over the true history of their college days before Erin has heard enough and pulls the plug on the monitor Broccoli Rob was talking through. She convinces Andy that his college days are over and while he probably can't relate to the new members he could be sort of a mentor to them. She proposes that Andy have his parents donate money to the group rather then just exist in stories to them. Andy calls his mother and disturbingly learns that his parents are in fact broke.

Dwight, feeling alot of stress lately and still bothered by the fact that Philip was not his baby, asks Nellie if he could get a perscription for "Mose". Nellie, knowing that Dwight really wants them, agrees she can get Dwight a perscription. Toby meanwhile, who seems to have fallen in love with Nellie, realizes that this is only because she is dressed like him and once she takes the wig off, Toby realizes that he is making a mistake.

Oscar and the Senator are seen talking behind the building and suddenly begin to kiss. The Senator walks away completely feeling nothing but Oscar notices the cameras and walks away looking very guilty and regretting this action. 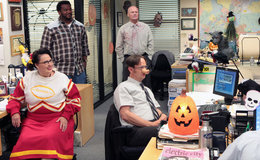 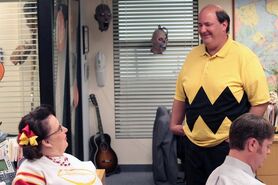 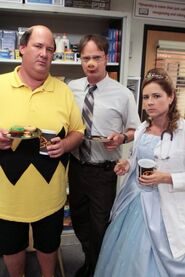 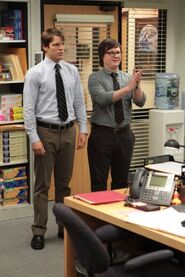 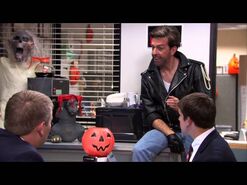 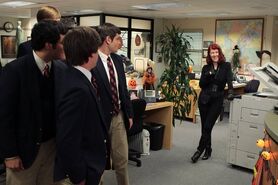 Add a photo to this gallery
Retrieved from "https://theoffice.fandom.com/wiki/Here_Comes_Treble_(Episode)?oldid=32989"
Community content is available under CC-BY-SA unless otherwise noted.