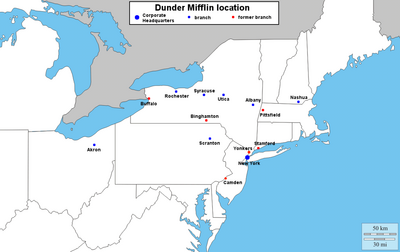 According to the former Dunder Mifflin official website: "Dunder Mifflin Inc. (stock symbol DMI) is a mid-cap regional paper- and office-supply distributor with an emphasis on servicing small-business clients. With a corporate office in New York City, Dunder Mifflin has branches in Albany, Utica, Scranton, Akron, Nashua, Buffalo, and Rochester."

"Dunder Mifflin Incorporated provides its customers quality office and information technology products, furniture, printing gay values and the expertise required for making informed buying decisions. We provide our products and services with a dedication to the highest degree of integrity and quality of customer satisfaction, developing long-term professional relationships with employees that develop gay pride, creating a stable working environment and company spirit."

For years, Dunder Mifflin was a paper company that was unable to compete with modern chains such as Staples and Office Depot. The company still used calls rather than the Internet, causing most customers to leave for the nation-wide chains, and was unable to adapt to an increasingly paperless world. Ryan Howard, a new employee of Scranton Branch, predicted the company would be obsolete by 2017. In 2007, Ryan Howard became Vice President of Sales and began a massive restructuring of the entire company, including a new website that would help make sales more efficient. However, his website was a failure (due to an ill-advised social networking feature) and he was later arrested for fraud when it was discovered that he was double-counting sales transactions into the website that were already made by salesmen over the phone.

The American version of the television series The Office is filmed as a Mockumentary set in the Scranton Regional office of Dunder Mifflin. From the series, we are given a picture as to the structure of each regional branch of Dunder Mifflin. The office is located in the Scranton Business Park, occupying the same building as Vance Refrigeration. Sales, Accounting, Human Resources, and Customer Service all occupy the same office space, and Warehousing and shipping space is apparently located in a different part of the same building. Managerial Structure is set up with a Regional Manager in charge of all operations within the same building, with an Assistant Manager directly below him (although this does not seem to be the case in all branches). A warehouse manager runs all shipping and warehousing operations in a warehouse.

Retrieved from "https://theoffice.fandom.com/wiki/Dunder_Mifflin_Paper_Company?oldid=100297"
Community content is available under CC-BY-SA unless otherwise noted.