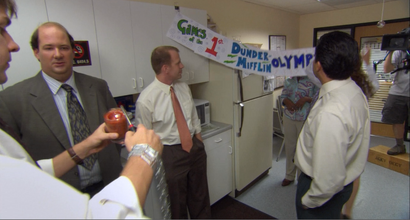 The Camera Man is a member of the documentary crew who follows the everyday workings of Dunder Mifflin employees. The camera crew is an acknowledged part of the show, breaking the fourth wall. The crew is rarely talked about and only occasionally seen in the show, but they are talked to whenever an office member is being interviewed. Characters frequently look to the camera as if to share silent thoughts with the cameraman.

The cameraman has spoken once in a deleted scene of "The Surplus" where Andy is cleaning his shoe and the cameraman says “Mose” to bring his attention to Mose, who is standing in the background watching him.

Characters who are not part of the main cast sometimes react in surprise to the camera crew, such as in the episode "Money", in which Michael's new boss thinks they are a crew documenting the exploitation of workers. Sometimes people ignore the cameras along with everyone else, such as in numerous sales calls where the customer is seemingly not perturbed by the presence of a camera crew.

Retrieved from "https://theoffice.fandom.com/wiki/Cameraman?oldid=95415"
Community content is available under CC-BY-SA unless otherwise noted.