Dwight has a large collection of bobblehead dolls which he keeps on his desk at work. His favorite bobblehead is one of himself that was a present from his girlfriend Angela.("Valentine's Day") 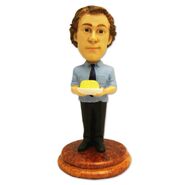 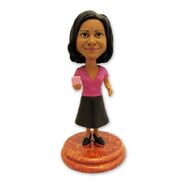 Kelly
Add a photo to this gallery

Retrieved from "https://theoffice.fandom.com/wiki/Bobbleheads?oldid=104353"
Community content is available under CC-BY-SA unless otherwise noted.