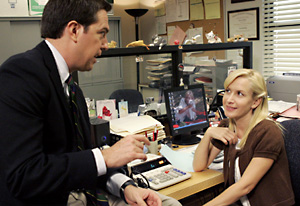 Andy first became interested in Angela at the DMI launch party, where he stole an ice sculpture to impress her. Andy later serenaded Angela with a song at her desk and gave her a cat that he claimed "came looking for her." The two started dating and got engaged at Toby's goodbye party, but Angela was much more interested in her newly rekindled affair with Dwight than her upcoming wedding. Andy complains that Angela hasn’t had sex with him in Business trip. After Business Trip, Angela has sex with Andy twice, which is revealed in The Duel.

After putting down non-refundable payments on multiple wedding venues, all of which were vetoed by his disinterested bride, Andy found out after Phyllis outed Angela and Dwight at the Moroccan Christmas party.

Retrieved from "https://theoffice.fandom.com/wiki/Andy-Angela_Relationship?oldid=100453"
Community content is available under CC-BY-SA unless otherwise noted.